This cost for this tour is based on the maximum number of people; 10 People. Therefore larger group bookings work out cheaper, per person, than individuals or smaller groups.

The Batak  are one of the oldest known tribes of the Philippines with a history of trading with the Chinese, which dates back as far as 500AD.

Up until recent history, the Batak Tribe lived a nomadic farming and hunter/gatherer lifestyle but found themselves pushed out of their natural areas by the encroaching sea, and other populations, and further in to the less fertile grounds of the mountains.

This Whole-Day Tour will take you to the Batak Visitor Center, in the Barangay of Concepcion, where you will have the opportunity to meet some of the smallest indigenous people in the world.

For those taking this Tour: bring with you Water, a Packed Lunch & snacks, as there is no restaurant or cafe at the Visitors Center and lunch is not included in this Tour.

Inside the Visitors Center you can view some of the traditional Tribal costumes, farming implements and bows, as well as traditional musical instruments.

A gift will be made to the Tribal Members on your behalf, which is included within the fee for this tour.  If you would like to bring additional gifts you are welcome to do so. 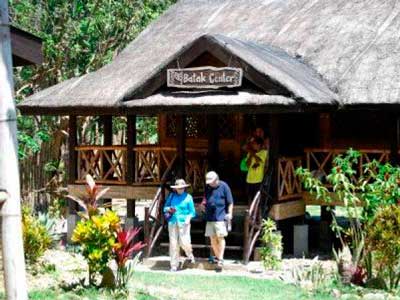 You will be treated to a Dance Performance by some of the members of the Tribe before returning to your air-conditioned van for the journey back to your hotel. 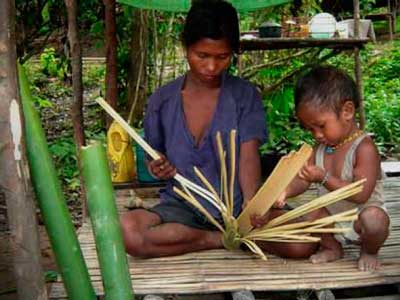 Some History about the Batak Tribe of Palawan
The Batak are one of around 70 different indigenous peoples of the Philippines and their natural homeland is in Puerto Princesa.  The Batak are believed to have originated from the first wave of humans who crossed the land bridges connecting the Philippine islands with mainland Asia, up to 50,000 years ago. Today, there are only around 300 Batak remaining

The Batak is a race of people who are known as a ‘Disappearing Tribe’.  Their dwindling numbers have been a result of high infant mortality, exposure to diseases (such as tuberculosis, measles, chicken pox and Malaria) and low birth rates.  Marriages outside of the tribe are also becoming more common, as a result of the smaller population, and children born of such marriages rarely follow the cultural ways of the Batak.

The Batak lived a nomadic, fishing and hunter-gather lifestyle and their Farming Methods were of the ‘Slash and Burn’ approach, allowing the lands they had used to ‘fallow’, or rest, for a few years.  Since the mid to late 20th Century, the Tribe has been pushed towards settling in small villages outside of their natural roaming areas.

With restrictions also placed on their traditional farming methods the Batak Tribe have supplemented their income by harvesting honey, tree resin and rattan, using methods that are said to be more natural and sustainable than commercial practises.

This natural approach is likely linked to their belief system of Animism. Many of the Batak continue to disappear in to the forests, for days at a time, to gather and to reconnect to nature and the spirits that they believe reside in elements of the natural world.  The Batak make regular offerings to these spirits, some of whom are suspicious of humans but will tolerate them as long as they don’t waste or abuse the forests natural resources.

Itinerary
You will be collected from your hotel in Puerto Princesa at approximately 6.00am

The journey, in an air-conditioned van with a private tour guide, to Batak Visitors Center, will take approximately 45 minutes.

At Baranngay Concepcion you will be met by a local guide and members of the Tribe.

At the village your guide will present the Tribe with some gifts for your visit, and you will be treated to some traditional Batak Dancing

We respectfully ask that you do not proceed with this tour if you have, or believe you have been exposed to, any of the following illnesses up to 14 days before the tour:

Suggested items to bring with you:-

Gifts of noodles and Sardines, for the tribe are already included in your tour fee but if you would like to gift other items you are welcome to bring these along too, such as colouring books and crayons for the children

HOW TO BOOK: after you clicked on book now button, will open new window, on this window select PUERTO PRINCESA TOURS mask at top