If you are looking for a heavenly place where to have a memorable holiday, then Palawan for you.
I know: I say it’s the most beautiful island in the world seems risky, but if you say it is Condé Nast then maybe there is some truth …

Often traveling in Southeast Asia choose countries like Thailand, Vietnam or Indonesia and the Philippines that are often underestimated. An unforgivable mistake. There is an island in particular, among the 7,107 that make up the Philippines, you can not miss: Palawan.

Palawan is a wild place, probably the place of your dreams!

The beaches are equally divided between the north-western side overlooking the South China Sea and the South-east facing the Sulu Sea. Among the most popular tourist sites of the island: Tubbataha Reef, Secret Lagoon Beach and The Coral Garden, where you can dive.

The entire province is sparsely populated, it thinks that in Puerto Princesa, the largest city, home to about 200,000 people. Conversely these people belong to 90 distinct ethnic groups speaking different languages: the largest group consists of the Palaweños, the ancient inhabitants of the islands. The national language, Tagalog, spoken by 28% of local people. The island of Palawan, was called “Pulaoan” by Magellan that reached in 1521, it is the largest of the islands that make up the province of the same name. The local people are very friendly and airport visitors are greeted by Filipino dances and local sweets. 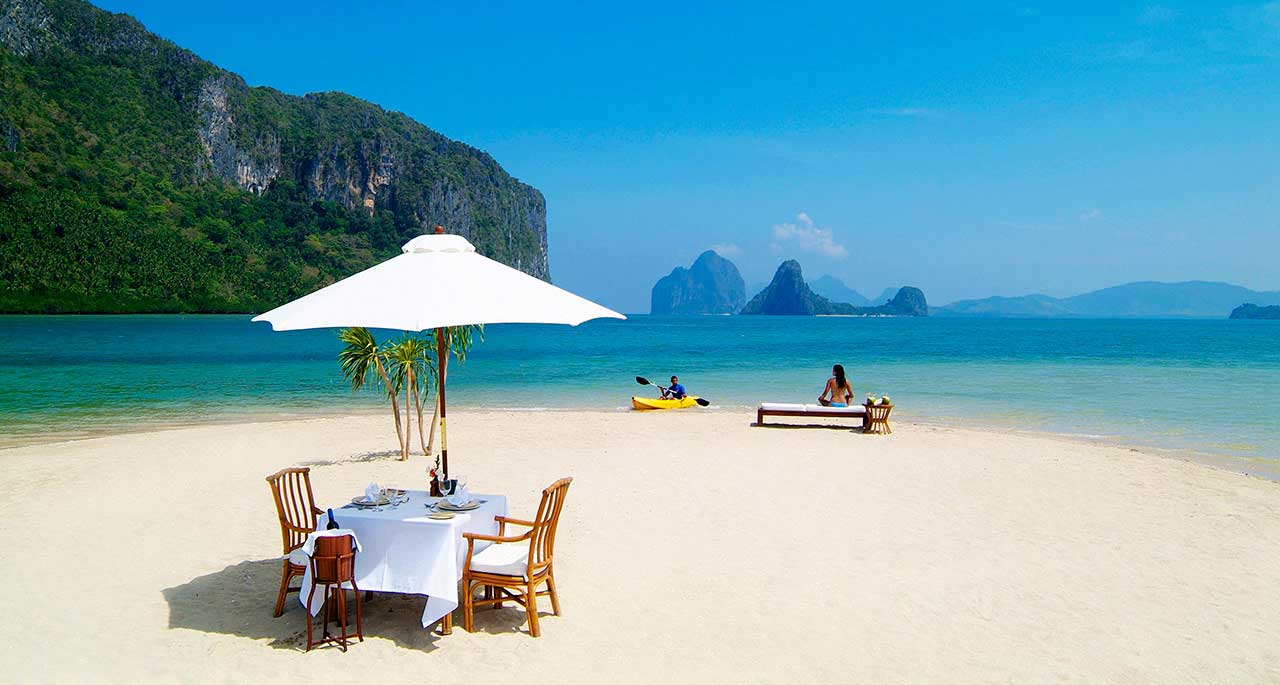 Palawan is one of the 7,107 islands of the Philippines, Puerto Princesa below flows the longest navigable underground river in the world. You ‘can do guided boat tours through a system of underground caves. Underground they are present in large quantities stalactites and stalagmites, as well as some large rooms.

The island is a natural paradise home to many endangered animals, for which tourism is that you try to promote what has greater respect island ecosystem. On the island are rare animals such as Bear Cat, the Calamian deer, squirrel probe, crocodile in the Philippines, and are observable at the Palawan Rescue and Conservation Center. The butterfly garden is a must-see for all travelers.

How to go to Palawan

There are daily flights to Puerto Princesa, the capital of Palawan, Manila and other Philippine cities. If you look a bit ‘in advance you can find very affordable rates with Cebu Pacific, as I explained here.
Or take the ferry from Manila, but it takes a long view distance: about 24 hours.
After landing it moves as in the rest of the Philippines: Jeepney or Tricycle. There are taxy.
If you are looking for a quiet place to sleep in Puerto Princesa, which is not the usual resort full of rowdy tourists, I recommend you to book here. It ‘a small guest house run by an American gentleman married to a Filipino woman. The atmosphere is friendly and if you want rilssarvi is ideal.

Things to do in Palawan: Underground river 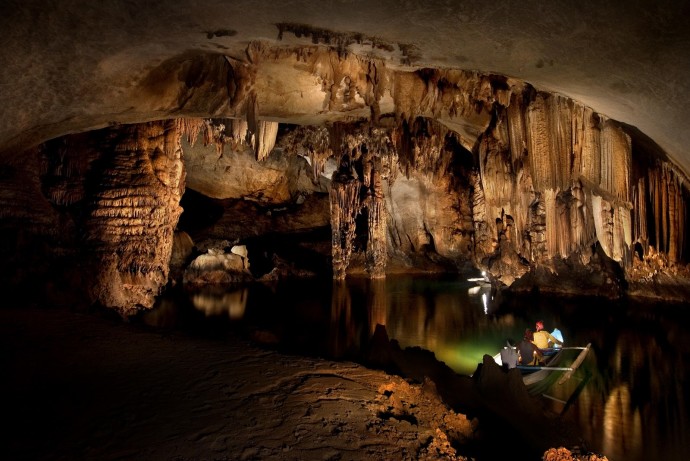 Palawan is an island rather large, 450 km long and 50 km wide, and so it is difficult to summarize in a post a few lines what to do and see on this island.
But one of the things you can not miss is the Puerto Princesa Underground River: one of the new seven wonders of nature. The river is 8.2 km long and flows slowly through a cave full of stalactites and stalagmites of strange shapes.
To preserve the site can not access more than 1000 people a day, then book a tour in advance is a good idea. Because you need to get permission to access it and the whole thing can take a couple of days. To avoid unpleasant surprises ask the hotel where you stay to organize the tour in advance, or contact
this agency. I booked with them and I was fine.
The Underground River is not exactly in Puerto Princesa but about one hour of road. If possible ask to leave early in the morning, around 6:30 to avoid the crowd.
The van will not take you directly to the entrance of the cave but to a pier about 15 minutes from the river. You will need to wait until your group is assigned a boat to travel the short distance to the beach close to the river.

You will not be downloaded to the shore but a few meters from the beach, so you get wet: go there in shorts and flip flops.

In the nearby beach at the Underground River you can watch the local wildlife: long-tailed macaques, the Palawan Water Monitor (a kind of lizard) and if you’re lucky the Peacock Palawan (Palawan peacock-pheasant). 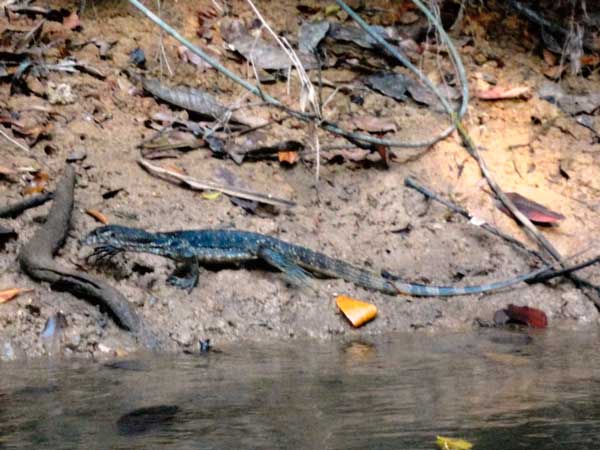 What to do in Palawan: El Nido

The most famous place of El Nido Palawan, however, in the north of the island. Once there you will understand why this name: it is circular cove sheltered by cliffs very high.
Getting to El Nido is not easy. There is a small airport but the prices are very high. The only alternative is a journey of 6.5 hours from Puerto Princesa. You can get there by bus or the van. Note that the van can carry more people than they have seats and roads, especially in the final stretch, very ugly. If you really want to travel comfortably you can reserve a van just for you.
Although the end of the trip you’ll probably dead tired, you will be rewarded by the sight of this paradise.

Where is the sunset in El Nido?!

Unfortunately El Nido the sun is covered in the afternoon from the cliff to the west, but Corong Corong is located right behind the mountains and the sunsets are perfect.
In fact it might be a good idea to sleep in Corong Corong rather than in El Nido. And ‘quieter and there are several beach resorts that do not cost too much. We chose Corong Corong and if I were to go back I would do the same choice.

What to do in Palawan: Nacpan 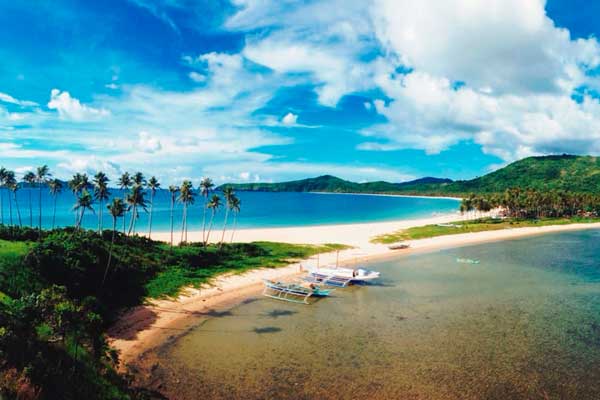 Processed with VSCOcam with lv01 preset

Do not forget to reserve a day to Nacpan, about 45 minutes away (if you can call it) from El Nido, to the north.
In fact if you have time I recommend you spend a few more days to Nacpan. Unlike El Nido, Nacpan is much less touristy and most people spend only one day at this beach. So about five o’clock in the afternoon it will be almost alone in a truly heavenly. A Nacpan will have the chance to see how people live: there is a fishing village right on the beach and another village nearby. Poverty and obvious, but people are very kind.

In recent years I have had the good fortune to visit several countries but I can honestly say that Palawan is the most beautiful place I’ve ever been. It ‘really the most beautiful island in the world? I have not seen all over the world so I can not know, but if you want to get a personal impression why not organize a trip to the Philippines?